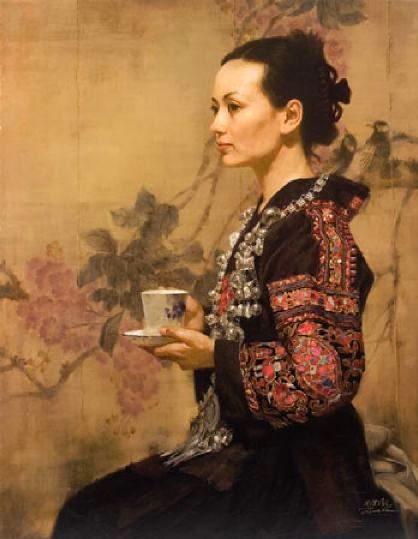 She sat near the window of the sidewalk café, silent, poised, and relaxed, smilingly sad, and alone. She was aged and yet ageless, gracefully old, with skin of fine parchment etched with fine lines, and she dressed with bold elegance, yet never the same; a splash of blue there, a dash of white there, a diamond worn there, a pearl displayed there, a show of small riches on the stage of despair; and she was so slight of frame she sometimes appeared just a shimmer of air, except when her jewellery glinted and shone, or her eyes glanced round with a dare.

She turned from the window, and looked towards me, as the young waiter brought her a bright silver tray with a white cup of coffee on a white linen cloth, a single biscotti and a single white rose, and her silver hair caught the sun’s cascading light and her eyes burst into sparkle, like turquoise alight. And that’s how we met, that warm summer’s day in a midtown café, me drenched in self-pity, in drunken despair, while she, ever tranquil, soft lips to her cup, caught my eyes with hers, to turn quickly away.

She appeared to me first on a June afternoon. The rain had just stopped as a rainbow appeared, and there she was standing, while gazing around, as if searching for someone who could never be found. She then took a table facing the door, near the large window, as if hoping for more. Just who she was, or was there to see, heightened the allure and the mystery for me. There was something about her, as if out of time, and when she walked in with a soft gentle air, I soon felt the presence of someone quite rare.

You may well ask my interest in someone like her so different from others, so different from me, but that was the thing that intrigued me you see. She seemed to be searching but calmly, assured, whereas I was just groping to somehow be cured.

So after three weeks, exchanging looks or a smile, one day, as she sat there with coffee, biscotti, her single white rose, I took courage in hand and rose from my chair to ask if she’d like a conversation to share. As I stood there before her, in hope of reply, I felt transported by eyes that softly scanned mine and offered my hand, she took gently in hers.

She replied, “A kind offer, but perhaps you would, instead, join me. I’ve my reasons to sit here, and, when known, you’ll agree.”

Intrigued, I accepted, and with bottle of wine, a half empty glass, my notebook in hand, I sat down before here as she gave me a sign. Once we were settled I offered my name but she asked why should we bother, to which I agreed. I called for more wine and offered a glass. She accepted with grace but while watching me pour asked what my black notebook was for, and seemed pleased when I said, it held notes to myself, that seemed once to make sense, but not anymore.

One question became many, one glass became three, and through lunch and desert and a dinner on me, she related long stories of the world of her youth. She spoke with an accent, of Vienna, she said, of a family of wealth and prestige. Prized pupil, prized teacher, a prized governess, she taught manners and music, played piano for ease. She regaled me with stories of Viennese nights that portrayed vividly things that made up her life; of dancing one night at a splendid state ball, in a palace, in summer, just before the Great War; of the troubles, defeats, the abdication and fall, of carriages, horses, and brass bands in parks, but mostly a young woman’s dreams, and only then did I realise how old that she was. I listened for hours, while sipping on wine, enchanted with a world so far from this. Her memories stirred me. Her voice was my bliss.

The tragedy of love composed her last tale and revealed the reason she’d come, so gentle and fair, to sit in the window of the Café Bellaire. In her days in Vienna, just by the grand square, near the cathedral where she once offered prayer, there stood an old building in one corner of which was the best place for coffee, for pastries, for music and life, where violins played sweet-singing airs, and so bore the name, The Café Bellaire. It was there she’d last been with the man that she loved, a youthful composer, with musical styles that he boldly arranged for the fast modern age, rejected by critics, and friends except her, for she played well the piano and played well what he wrote, even his most daring and difficult notes.

They met at a dance in a working class hall, his spirit moody, hers happy and fair, but he softened with time, while she grew intense, as their passion was focused, first smouldered, then burned. She inspired him to heights he never could dream, to write harmonies and melodies never since heard. He played them to her, she played back to him, on the piano he had where he paid room and board. The music flowed fast from The Muse to the page while her hands flew on the keys as if in a rage. His professor soon damned him for breaking the rules. The critics condemned him, but they were all fools. Still, they had their effect. His spirit was broken. He once spoke of death, but she begged him to live and played, as her plea, the music she loved and knew the world would. So he continued to write down note after note, while she shared his creation as only she could.

Then came the war, and he was called up. The music he heard then was the sound of the guns. His battalion was ready and soon called to the front. He begged and he pleaded for a last evening pass, and when it was granted, from his cold barrack bed, sent her a note, stained with hot tears, as hot as his blood. His regiment was leaving for the harsh mountain front, to face the Italians, those people he loved. He had one chance to see her, to see her face fair, and so asked to meet at The Café Bellaire. She dressed in the coat he especially loved, wore her favourite blue hat, edged in white lace, and hurriedly walked to that last meeting place. But he’d arrived first, all dressed in field grey, boots pacing the stones as snow fell on his cap, anxious, tormented; his leave was soon up.

She saw his cold form as he walked up and down, as the lights on the street cast shadows around. She ran to embrace him and he embraced her. They kissed and they hugged, ‘til their bodies seemed one as over and over she begged him to stay, cried nothing made sense, begged him please run away; but he talked of his duty, and what could be done, orders were orders, and this was his fate; he had to leave soon, he couldn’t be late. They stood there, snow covered, ‘til his last words of farewell; that the war could not part them and nothing else would.

He said he’d return, and that without fail, but if for some reason she heard no news how he was, or answers to where, she must wait for him there at The Café Bellaire. He kissed her once more, with no more to say, then turned on his heels to walk quickly away. She stood a long time in deepening cold, then slowly walked home past the sparkling lights, in sadness, in sorrow, alone.

He never came back. She never heard news and his name was not mentioned in the casualty lists. Inquiries led nowhere as long years went by, but still she returned to The Café Bellaire, week after week, and year after year, hoping her love would make him appear. Her vigil was lonely and time became swift, then came a new war which caused her to flee, to Paris, to London, and finally here. She’d never been married. She was waiting for him. So when, on that day, three weeks ago, she again saw the sign of the Café Bellaire, she had no choice but to enter and continue her wait, for she believed what he said, and this was her fate.

When she finished her story, I sat silent and troubled, knew not what to say. But she read my thoughts quickly and quietly said, “My life has been long and I am content. Love’s what’s important. There is nothing else. I wait for a dream but a dream is enough.”

She said she felt tired, then gracefully rose, and I helped, with affection, to walk her outside, where she smiled at me once, kissed me gently goodbye, then let my go my hand and passed from my view. I went back inside to write it all down hoping see her the very next day but she never returned nor has ever since though I asked all the waiters if they’d heard any news, but none of them had and none of them knew. She was old, one suggested, and so very frail. It’s sad, but really, how long could she last, and maybe that’s true. But still I am sitting, in this lonely café, waiting, and hoping, as she used to do, for something to happen, for a dream to come true.