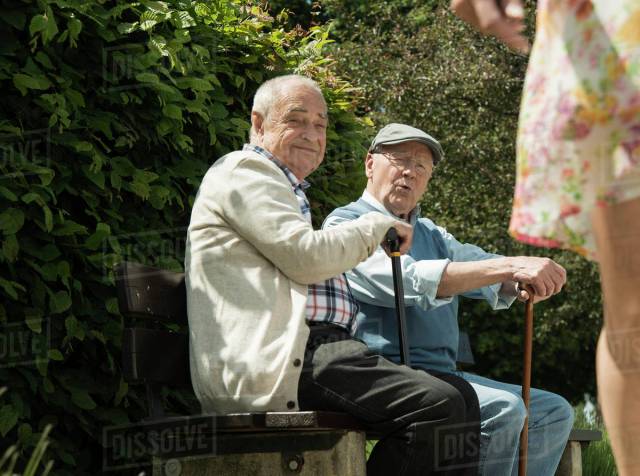 (Lights go up to reveal two old men sitting on a bench, both with their hands resting on their canes, looking into the distance, at a pond, at ducks, at women passing by)

First man: Beautiful day today, don’t you think, the pond, the ducks, and some fine ladies passing by.

Second man: I try not to think about them.

Second man: Hah, a comedian, you never were.

First man: I was trying to avoid the subject.

Second man: No need, they avoid us.

First man: Oh, I have my hopes.

Second man: Hopes? Who’ve you got the hopes for?

First man: The love of my life.

Second man: This love of yours have a name?

First man: I see her in my dreams. Like Dante’s Beatrice, she appears and smiles at me. Each night she appears. Wearing a long white dress. Beckoning me.

Second man: Then you’re stealing my dreams, because she visits me at night too.

First man: I’m betrayed!. Though what she sees in you I have no idea.

Second man: We all have our illusions.

First man: But the same one?

First man (gazing up): That’s an interesting cloud, like a ship in sail.

Second man: A sea voyage, nothing like it to appreciate how insignificant we are.

First man: Maybe in the old days. Now the sea’s dying faster than we are.

Second man: (a sigh then), Yes, what we’ve done. Terrible things. But the park’s still beautiful.

First man: Which makes me wonder, would you lend me 50 bucks?

Second man: Are you kidding me-what do you need 50 bucks for? If it’s for a filly you can forget it. Last time you bet on a race with my money you lost it all.

First man: This filly is no horse I can tell you. Just thought I’d ask Diana out for dinner and my pension hasn’t come in yet.

Second man: Diana? Our Diana? The physiotherapist? Why would she be interested in you, especially when she’s made it clear she is interested in me?

First man: She loves me.

Second man: Impossible, she loves me.

First man: Has she said so?

Second man: Not in so many words but there is no doubt. Women can’t resist my charms.

First mans: Then why are you alone at your age?

Second man: My charms become the problem. First they love me, then they hate me.

First man: There you go, so why bother with Diana, The same thing will happen. She’s better off with me, then you can avoid all the trouble.

Second man. Love is always trouble. You can’t talk your way out of this.

First man: Well, one of us has to surrender the field. And it’s not going to be me. And she’s half your age.

Second man: And you-but she’s an angel- age means nothing to her-she sees into my depths, into my soul, and what she sees touches her.

First man: (laughing,) I don’t know what they put you on, but you can forget it. You’re deluded. She loves me and I’d advise you to keep your distance.

Second man: if that’s how you see things then you can forget the 50 dollars. I’m not lending you money so you can steal my woman. In fact, I’m warning you stay away or things can get violent. (raising his cane in one hand in a threatening manner.)

First man: (standing up and raising his cane in defence) Who do you think you are? Some friend you turned out to be. You’re a thief, a common thief. I’ll have you kicked out of the home. You just watch, I’ll fix you, I will.

Second man: (Standing in a fighting stance, cane at the ready)

If anyone is leaving the home, it’s going to be you. In fact if you keep this up you won’t arrive there again.

(raises his cane over his head)

First man: If this were a different time I’d challenge you to a duel and shoot you dead.

Second man: For love I’d willingly die, but you couldn’t shoot a barn door if you were in front of it-It’s you that would die and good riddance too.

First man (approaching and getting in his face) I used to think of you as my friend, my best friend.

Second man: You don’t know what the word means.

First man: It means someone who loves you, who is loyal, someone you can trust, but you-you-you cant be trusted. You only care for yourself, I’ve seen it before but kept quiet, but you know what-really, I hate you. I wish you were dead. (he again raises his cane to strike)

Second man: You phony, you hypocrite, just try me, just try me , My love is my life, take the one, you take the other (he raises his cane to strike back)

First man: Love, hah, Then for love you will die or I will. So prepare-so my anger can be satisfied, so I can love. Prepare to die.

Second man: (raising his cane and hand to block a blow from the other)

Stop, stop. Just stop, my god, what are we doing?

First man: Not to me it isn’t.

Second man: War never solved anything-or murder, are we going to kill ourselves over this, and my heart (grabbing his chest) my heart -this is madness.

Second man: It’s made us what we are. Look at us.

First man: I’m regretting we came to the park today

Second man: We’ve always come here. you and me, together.

Second man: You’re right. And she’d take up all our time.

Second man: You mean mine.

First man: (another sigh as he sits down on the bench and the second man follows him to sit once again next to each other, hands on their canes, looking into the distance)

I’d miss sitting here with you.

Second man: And I with you. Our conversations. Just sitting alone, together, being in the moment. What else is there?

First man; Love isn’t what it’s cracked up to be, not that kind of love.

Second man: Look what it’s done. I was close to killing you.

First man: You wouldn’t have succeeded, but I might have. Love. Hate. So close in our hearts. Killing for love. Look what it reduced us to.

Second man: On second thought, if you still want the 50 bucks, it’s ok, you can go out with Diana, I was just thinking about the nurse on the morning shift, maybe…

First man: You know what, I’ve changed my mind. Why spend all that money on a love I’m not sure of when I’ve got all I need sitting here with you.

Second man: Yeh, you’re right, what can be better than this.

2 comments on “Love On A Park Bench”