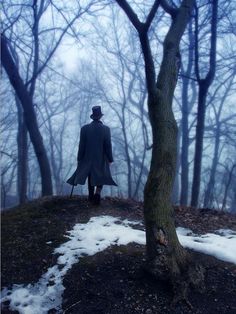 The snow on the path was in gentle decline,

And gentle drops fell, like dew from the vine,

As blue jays and starlings, and other such thieves,

Called out their names through branches and leaves,

Who fiercely intent on their feathery needs,

Picked out by sunbeams, dancing through reeds.

A tall man, an old man, on the dampened path stood,

To listen, and wonder, what language they spoke,

Or if, instead, dreamed, before they awoke,

And if, in their dreams, these times understood.

‘Where went you away? Did you travel so far,

As you followed  the light of this weary star?

Did you happen to fly over Reason’s sweet land?

Did you make it this year to fair Samarkand?’

But, before they could answer, a woman’s voice called,

‘Wait, for a moment, there’s one simple thing more,’

Waving her hand from the old cottage door,

He nodded, then smiled, in casual good-bye,

Waved a hand in salute,

Then turned back to the sky.

2 comments on “The Snow On the Path”