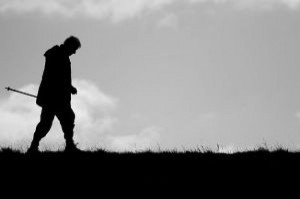 I walked home from the city, the saddened world within my mind,

Talking to passing shadows, to slippery shapes in kind,

Longing for refuge somewhere, a safer place to be,

Before I die a lonely death, in the old house by the sea.

A weary, sad and sadding place, a place of diamond tears,

That touch the petals of long dead flowers, slain by fattened fears,

In a town which should be nowhere, beyond the claims of Fate,

Or in a madman’s nightmare, or near the devil’s gate.

I saw in thoughts those other times,  when all was good for me,

My family at the seaside, a girl in Tuscany,

Until I passed the open door and climbed the stair’s first flight,

And heard an Arab play the oud who sang sweetly to the night.

An open door framed a girl and boy, a loving, kissing pair,

They lived in tiny, dirty rooms but now they did not care,

As I stood awhile and stroked the cat we all had sometimes fed,

A lonely, stalking, city cat that sniffed the lonely dead.

I stepped into a darkened room through an opened door,

And breathed the air of emptiness that made me yearn for more,

I stopped, but why I cannot say, no reason not to stay,

And who has more than this, I heard my voice to say.

In Hell, while I laid down in bed and read those tales the fairies told,

Of places that can never be, where youth grows never old.

Such tales of light, to passions dulled are like the dark red wine,

That weaves a new reality from angel hair wove fine.

But soon I lit the blackened, waiting, screen of the void they call TV

And saw nothing there but emptiness, nothing, paid or free.

So on I turned the radio and heard the music call,

Opera, blues and rock and roll, but they pounded on the wall,

Still I listened, and looked straight up and thought I saw a glow,

But no sign of god could I see there nor Michaelangelo.

I looked into a mirror and caught the sudden tears,

That face is mine they say, just carved by bitter years,

I began to read the paper, to see what news there was,

But I read and read of death and sin, and never-ending wars.

As madmen wash their hands in blood and glory in the fear,

Tortured winds scream in pain and storm clouds gather near,

So in sweet silence still I lay, wondering of our fall

As a siren like a hot cat howls, in answer to us all.

In deep I breathed the dead night air and visioned time to come,

Walking from the city with my ragged coat and rum,

And, one magic, special night, and a kiss beneath the stars.