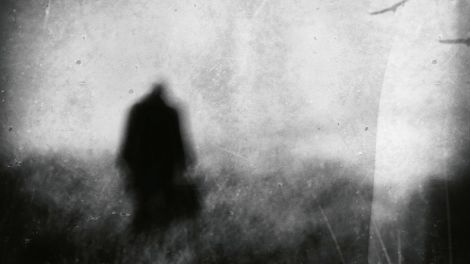 I have the habit of going for a walk in the morning, walking silently, in safe solitude, simply breathing, legs stretching out, arms keeping time, feeling a different rhythm of life. It helps me deal with the increasing agitation I experience on hearing the daily news of wars, corruption, of people alienated from each other, from themselves, of a dying world.

My routine takes me up the paved road to the top of the hill, the hill that dominates the small Ontario town in which I live, which lies spread out along the river that winds its way south to the great lake. There, looking down over the valley below, sits a church, a cathedral almost, St. Mary’s, the Catholic church which dominates all the other churches in the town by its majesty, as if to show the protestants what a real church should look like. Sometimes, when the mood strikes me, I stop to look at it, to admire it, for though I am not a religious man, the ceremonies, the architecture, the art and iconography of the church are to me mysterious and beautiful. The rest of it creates no interest for me. I find my salvation in the nature that surrounds me, not in the mythology of its creation.

Or so I thought, until something happened that caused me to reconsider the mysteries of the world.

One day, in early June I think it was, the year of the great spring rains, I decided to get up earlier than usual to take my walk. I couldn’t sleep. The sun was rising. It promised to be a dramatic overture to the day; a blue sky covering green hills awash in bird songs sung in many different keys, accompanied by the soft rustling harmony of countless leaves whispering in the warming breeze.

The locals of the town were beginning to stir. The occasional vehicle, a pickup truck, a run-down car, passed me by on the way to market or work, but no one else was walking along the street that led from my house to the main street, then up the hill heading towards the edge of town and the tower of St. Mary’s that held the big bell; the bell that rang out several times a day calling the faithful to prayer.

When I got to the top of the hill and stood in the shadow of the entrance to the church with its big wooden double doors, flanked on each side by a Norman tower graced with several stained glass windows, the left tower with the spire and cross at its top, the right containing the bell, I paused in my walk, put my hands in my pockets, looked up to the bell tower and wondered just how big that bell was. It was while pondering this question that I heard the clunky thud of the church doors opening and closing and on looking over I saw a figure coming towards me dressed in the black habit and black beard of a Jesuit, which struck me as odd as there were no Jesuits in the parish that I had heard of.

I could not see his face. It was hidden in the shadows of the old fashioned cowl he had covering his head. He approached me slowly with a steady step until he stood in front of me. For some reason, the angle of the sun, the weight of his cowl, I could not see his face apart from the black beard, tight, grim lips, the tip of a hooked nose above the moustache. The rest vanished into the darkness of the hood he wore despite the warming of the day.

I greeted him with the usual “Hello; nice day, isn’t it?”, or some such thing that we say without thinking when meeting strangers. It gets muddled in my head now, but there was no response. The figure stood in front of me without moving, very still, like one of those human mannequins tourists are delighted by in Europe, a Marie Antoinette, a silver clown, or a marble Dante with his book. He seemed very solid at first, but then I noticed that his form shimmered in the light as do those mirages of dark water that lie across the road in the summer heat and vanish as soon as you see them.

The silence of this apparition, for so it seemed to be, unnerved me. I stepped back, took my hands from my pockets and prepared to retreat. But the form continued to stand there without a sound or movement. Now more unnerved, I challenged him with, “Are you all right Father? Can I help you?’

He spoke in French, a language I understand, but with an accent I had not heard before. I still am not sure if I understood him correctly, but I was so transfixed by the voice and the movement as I followed his hand pointing at the world around us, that I seemed to comprehend him nevertheless and was surprised when a sudden feeling of intense melancholy swept over me. Tears filled my eyes, and I fell to the ground at his feet, overwhelmed by sudden grief.

He stopped turning, looked at me, lowered his hand, and bowed his head. He began to turn away from me. I reached out to try to stop him, but my hand passed through air. I struggled to my feet, wiping away the tears that still bathed my eyes, trying to restore my equilibrium, but he did not stop and kept walking back towards the doors, his shoulders and back bent, his head lowered and, through my own tears, I saw signs of a man sobbing uncontrollably. I managed to shout out, “Who are you?’ perhaps an unfair thing to ask when I was not even sure who I was.“Your name?” And protested, “I’ve done nothing, just lived.”

He stopped, turned his head to look at me over his shoulder and with a voice that came from a deep abyss said, again, “What have you done? What have you done? Terrible things, terrible things,” each word a moan, or so it seemed, as he turned his head away and walked slowly back to the door of the church where his shimmering figure merged with the door and dissolved into the shadows as if he had never been.

The encounter so disturbed me that I felt paralyzed for some seconds until I regained my senses and, shaken, decided to turn back towards home. As I walked slowly back into the town, I reflected on the melancholy encounter, what it meant, that question from the past demanding an explanation from the present, about our destruction of the future. For that was what it was. Of that I am sure.

Upon relating what happened to my wife, my friends, my doctor, explanations were quick in coming. My wife looked at me oddly. Some said outright I was a liar and pulling their leg. Some religious people took it as a proof of God, a warning from the Almighty, some as the visitation of an angel. The Catholics quickly claimed it as a miracle, proof of the true martyrdom of Jean De Breubeuf in 1649, whose ghost this undoubtedly was. I hear the matter has been raised at the Vatican, and the students of the local schools now discuss the work of the Jesuits in the area three hundred years ago. The Protestants, in protest, proclaimed it to be God’s clear condemnation of the Roman church. The new agers stated categorically that it was the manifestation of some spirit of nature, mourning its steady destruction, and, of course the psychiatrists, my psychiatrists, determined, on clinical evidence, that it was an hallucination, a psychotic episode; that I had experienced a break with reality. I cannot comment on these theories. When I try, my attempts are considered just more evidence that my mind is unbalanced. And who am I to say it is not.

Several months have since passed. I have learned now to keep quiet, to agree with them that I was ill but now am welI. I was finally allowed home after a long period of analysis, allowed to return to the birds, the sky, the whispering leaves, to again walk past the church on a warm spring or summer’s day, as if nothing had ever happened. But, each time I do, each time I see those doors, when the light is right, the sky is blue, the leaves whispering, and no one else is there, I still see the man at the church, and hear that ancient voice moaning and asking over and over again, “What have you done? What have you done? Terrible things, terrible things.”

9 comments on “The Man At The Church”